The Most and Least Liked Industries in America 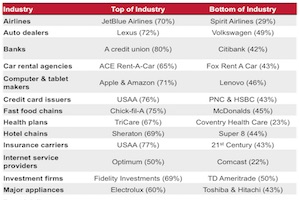 The computer industry is the most liked business sector by Americans, according to a recent report from Gallup.

The report was based on data from a Gallup poll conducted in August 2015 of a random sample 1,011 adults from all 50 US states and the District of Columbia.

Some 69% of respondents say have a positive view of the computer industry, and only 10% say they have a negative view.